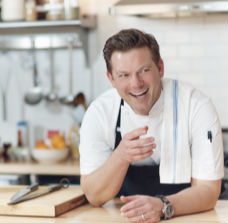 Chef Tyler Florence
Celebrity chef Tyler Florence will visit the Port City in January to share his signature culinary style and support the Girls Leadership Academy of Wilmington, according to an announcement Thursday.

Three events are scheduled around the visit: an exclusive dinner for no more than 24 guests in a private home Jan. 23, and breakfast and lunch events at the Country Club of Landfall on Jan. 24, a news release stated.

"For all three events, Florence will determine the menu, source ingredients and supervise both Food Network and a locally-sourced staff of Wilmington chefs, while regaling guests with stories from behind the scenes of his career as a celebrated chef, restaurateur, cookbook author, culinary retailer and television personality," according to the release.

Florence is the fifth Food Network star to visit Wilmington in support of GLOW. Emeril Lagasse hosted events in 2016, Giada De Laurentiis in 2017, Guy Fieri in 2018 and Robert Irvine in 2019. The celebrity chef events reflect the career of GLOW Academy Founder Judy Girard, who was president of the Food Network from 1994 to 2004.

Over the past 15 years, Florence starred in such Food Network series as How to Boil Water, his cooking show for novices; Food 900, his popular “recipe rescue” show; as well as his signature series, Tyler’s Ultimate. Florence has also hosted numerous other Food Network shows and specials, including Planet Food, All American Festivals and My Country, My Kitchen; and he is a regular guest on The Today Show, CNN, The View, The Tonight Show, Good Morning America and more.

Sponsorship opportunities for Florence's Wilmington visit in support of GLOW are available with benefits including personalized and autographed books, meet and greet occasions and premiere seating. Tables of 10 go on sale Nov. 11, and individual tickets, if still available, will go on sale Dec. 9. For more information, visit glowacademy.net.

GLOW is the state's only single-gender charter school. This year, the school celebrated the grand opening of its own campus on a 31-acre site next to Maides Park, at the end of Sunglow Drive in Wilmington.

"With a focus on closing the achievement and opportunity gaps among low income families, the sixth- through 12th-grade school is part of a nationwide network of 19 single-gender schools," the news release stated.