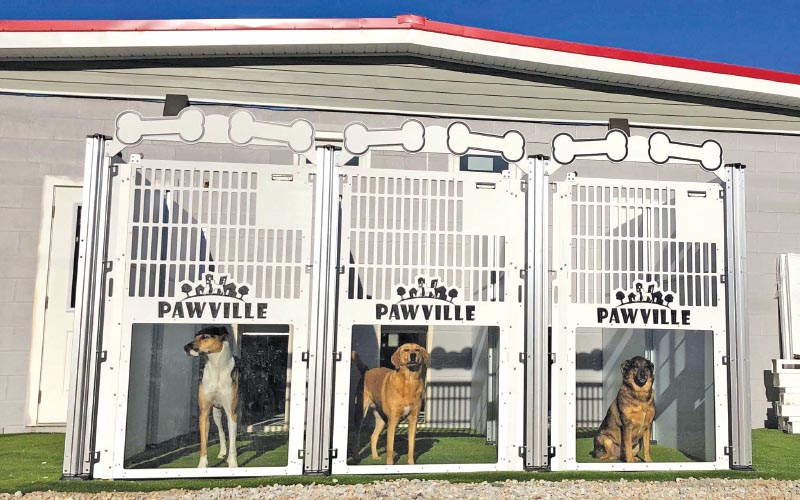 Guests at Pawville in Jacksonville contemplate the boarding facility’s scenery from the yards of their dog townhomes. Pawville will include boarding townhomes in the new Wilmington location. (Photo courtesy of Pawville)
Furry friends mean big business.

That’s why two separate pet day care and boarding facilities are looking to fill what they see as a void of places catering to pet owners in southern Wilmington.

A Port City location of California- based franchise Camp Run-AMutt is on the way to 2541 Carolina Beach Road, and along the same corridor, the property’s new owner is planning a Pawville facility behind Bone & Bean restaurant.

The Johns family recently purchased what was formerly occupied by an Asian buffet restaurant and is turning it into a Camp Run-A-Mutt. Meanwhile Pawville Real Estate Holdings LLC bought 3530 Carolina Beach Road for $400,000 from previous owner Roubini Omirly for the property that includes Bone & Bean, according to the New Hanover County deed.

“We’re planning to continue leasing the restaurant building to Bone & Bean and build a new Pawville building behind the restaurant, which will allow the Bone & Bean to continue operating alongside our new Pawville facility,” said Phil Miller, founder and CEO of Pawville, which also offers self-serve dog washes, a dog treat bakery, training, grooming and a boutique. “In fact, we’re excited to find the synergies between the two businesses [Bone & Bean and Pawville] that will enhance the experience of pet owners as they drive onto the property.”

The new, 9,000-square-foot building will be Pawville’s fourth location, Miller said, with the other three located in Surf City, Jacksonville and Homosassa, Florida.

“We opened up our first one down in Florida back in 2007 and then Surf City in 2012 and Jacksonville in 2015,” Miller said. “The intent is to continue growing, and so up to this point, the locations have really have sort of been betas, where we’re trying new and different approaches to providing these services for our clients.

“And so this will be the first time that we really bring a lot of these things together that we’ve been trying at our different locations into one location that will hopefully serve as a prototype for us as we continue to grow beyond the Wilmington region.”

Camp Run-A-Mutt, which also offers training and grooming, is on its way to Wilmington via the efforts of the Johns family. The Johns bought the property at 2541 Carolina Beach Road for $789,000 from Chen Properties LLC, and Jason Windham, broker at Maus, Matthews, Warwick & Co., represented the seller in the transaction.

Jenna Johns is setting up the franchise with the help of her parents, John and Lisa Johns.

“Before I graduated, my mom and I were planning to start a personal concierge business,” said Jenna Johns, who has a degree in business management and an entrepreneurship certificate from Colorado State University. “And we’ve been doing that for … almost two years now. But we all love dogs and each have dogs and are big animal people.”

While on vacation not too long ago, Jenna’s mother picked up a copy of Entrepreneur magazine, which had an article on dog day care franchises that featured Camp Run- A-Mutt.

A week later, they decided to go for it, Jenna Johns said.

Finding the right location was a little tricky because of zoning rules, she said. But the former restaurant had so much potential, “I just fell in love with it,” Jenna Johns said.

Camp Run-A-Mutt, which has a franchise fee of $30,000, requires a lot of outdoor space. The dogs who go to day care or are boarded there stay together inside and outside, Jenna Johns said. The 11,000-squarefoot building will also have plenty of room for grooming.

Jenna Johns said she and her parents hope to open by July.

Pawville will be first and foremost a boarding facility, Miller said, with dog townhomes and private yards.

“What makes us kind of special and different is that we put a lot of thought into where the dogs are staying, and so each dog has their own big enclosure inside, but then they have a vertical sliding dog door so they can go outside into their own private yard that has artificial turf,” said Miller, who graduated in 2013 from the University of North Carolina Wilmington’s professional MBA program. His wife and cofounder of Pawville, Amanda Miller, is a former vet tech.

The Millers’ facility will also offer cat boarding and have cat condos.

Both the Johns and Millers said they think the Carolina Beach Road area near Shipyard Boulevard is in need of the kind of facilities they plan to open.

“With the growth of the housing down there, it has created a little bit of a void that we would like to fill in our market,” Phil Miller said. “To me, it does feel like Wilmington is pretty saturated with a lot of facilities, but this was one of the few areas that was not.”

“It’s just that kind of community. People have to bring their dogs on the boat. People are constantly taking their dogs everywhere. You see people at coffee shops with their dogs,” she said. “And I think people want to spend money to make sure their dogs get taken care of the best that they can.”

It’s a trend that has continued to get bigger, Jenna Johns said. The pet business of pets is a more than $70 billion industry, according to the American Pet Products Association.

One growing part of that industry is boarding and day care services. Phil Miller has seen that growth firsthand, he said, doubling the size of the Surf City Pawville facility in 2015 and currently preparing to complete an addition in Jacksonville.