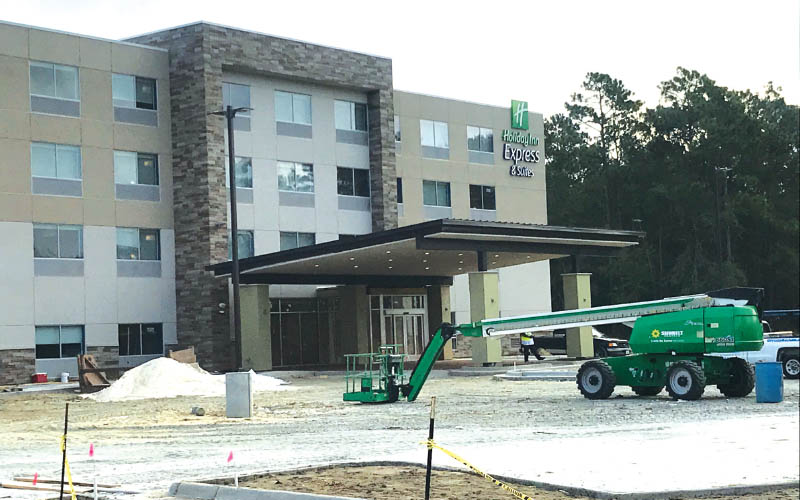 Steve Arp and partners, including Singh and Manjula Ahluwalia, developed a Holiday Inn Express & Suites on Medical Center Drive, shown under construction Sept. 30. (Photo by Cece Nunn)
In recent years, Wilmington booked the development of hundreds of hotel rooms. But that trend might be slowing down now that some projects are well underway or nearing completion.

Arp and partners, including Singh and Manjula Ahluwalia, developed the Holiday Inn Express & Suites on Medical Center Drive which that is currently under construction.

Arp said the four-story, 109- room hotel is expected to be completed by the end of October.

“I know everybody wants to build a hotel,” Arp said. “There’s a lot of demand, and supply’s at a point right now where it’s pretty much leveling off.”

He said he thinks various areas around town might have enough hotel rooms that are here or on the way, including midtown Wilmington and the Landfall/Mayfaire submarket.

Nationwide, the industry could be slowing down, depending on the source of information consulted. An August article on the website of Hotel News Now stated that signs point to a slower performance, based on a presentation from Vail Ross, senior vice president of global business development and marketing at STR. The Tennessee-based company tracks supply and demand for different markets, including the hotel industry.

In February, a Wall Street Journal article predicted the worst slowdown in 10 years, after a decade of ongoing expansion.

In Asheville, the city council voted Sept. 24 to ban hotel construction for one year after residents shared concerns about the impact of the tourism industry on the city, according to an article in the Asheville Citizen-Times.

“Again, the market’s great,” Arp said of Wilmington, “but what you don’t want to do is end up building them and you can’t support them.”

One of the latest large lodging projects under construction is the Aloft Coastline Hotel at 501 Nutt St. downtown.

The Aloft will have seven stories and 125 rooms, and amenities will include a full-service restaurant, ground-level bar, rooftop bar, meeting rooms, banquet rooms, guest services, outdoor terraces, a fitness center, service kitchen and a 7,000-square-foot ballroom, according to a news release from January. The hotel will be adjacent to the 100-year-old historic Coastline Conference & Event Center, which is being renovated as part of the project, officials said.

“The existing building will house an additional 3,000 square feet of meeting space,” the release stated.

Building the hotel presents different kinds of challenges than other hotel projects might because of its location downtown, according to officials with contractor Clancy & Theys Construction Co. That’s because developer Poteat Hospitality is incorporating the historic structures into the project.

“The older buildings, you have to be real careful around,” said Rob Bridgers, director of business development for Clancy & Theys. So far crews have been working to add pilings to the site that will support a seven-story hotel behind the coastline convention center.

More hotels are on the way throughout the area. In midtown Wilmington, a Georgia hospitality firm plans to build a hotel at The Pointe at Barclay.

Owner Mehul Patel of Ideal Hospitality Investments Inc. said earlier this year that the company intends to create a four-story, 108- to 110-room Home2 Suites by Hilton beside The Pointe 14 movie theater.

Wilmington Hotel Investors LLC, an entity of Ideal Hospitality of Pooler, Georgia, bought the property, a little over 2 acres, in May for $1.2 million.

The Home2 Suites at The Pointe will be one of the first Wilmington hotels for Ideal Hospitality, an owner- operator company that has hotels throughout the Southeast, including North Carolina, South Carolina, Georgia and Florida.

A Westin Hotel & Spa is planned off Military Cutoff Road as part of The Avenue mixed-use project.

And in northern New Hanover County, other developers are working on a Holiday Inn Express, which is expected to be open by the third or fourth quarter of next year, said Barry Eagle, president and CEO of Crown Hotel & Travel Management.

“We think it’s going to be our best locations out of all the locations we have, and we have a lot of good ones. We’ve received many, many calls from people who are excited about when it’s coming in,” Eagle said. “We’re excited. We think the demand will be pretty high … just based on the amenities in the area.”

Located in Porters Neck, those amenities include a Chick-fil-A and numerous other restaurants and stores, he said, with more growth expected.

“We think we’re part of that growth,” he said, “and we don’t see a slowing down at all.”

Eagle said he doesn’t see saturation in the market at this point.

“If all of them [hotel rooms planned and underway] get built within the next three to four to five years, Wilmington’s going to have a pretty good base of rooms to provide any type of large groups coming in at that point,” Eagle said. “It’s just based on leisure trends.”

Additionally, new economic development, along with more events coming to the Wilmington Convention Center, could increase demand, he said.

“If more businesses move here with all the new hotels that would be coming on board,” Eagle said. “there may not be enough rooms.”