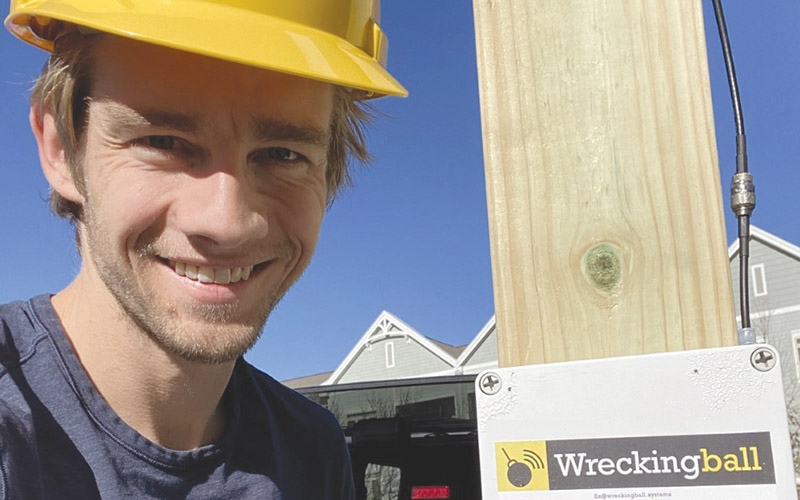 Through SafetyNow, workers can complete safety orientation and compliance training and employers can track documentation. (Photo c/o WreckingBall)
Merging his software engineering skills and his entrepreneurial spirit, Cecil Worsley IV created Wreckingball Systems, a young software company that is already getting the attention of entrepreneurship organizations.

Through its product SafetyNow, WreckingBall provides a safety orientation and compliance platform for commercial construction workplaces. In October, the company was announced as a winner of a $10,000 NC IDEA MICRO grant, making it one of 22 companies recognized in the state.

Worsley, who was born and raised in Wilmington and went to Elon University, has held various web and software development roles, including working as a software engineer for San Francisco-based Looker and Scoot Networks as well as an investor and consultant at Flow ROI in Wilmington.

“I've always wanted to start my own thing. Growing up, I was one of those kids with a lemonade stand that ended up making like $200 in a summer, which was a fortune for a 10-year-old or however old I was,” Worsley said. “I've always had that entrepreneurial spirit and excitement.”

WreckingBall came about during a conversation he had with friends that led to him try to solve problems in the commercial construction space.

“I had a friend who was working for a large commercial contractor here in town. And, just as friends do, we are sitting complaining about our jobs and he's complaining about his and I'm like ‘I think I might be able to fix some of that,’” Worsley said. “One thing that I do as a software engineer is I’m somebody who will go and get something practical and real-life done quickly. He wanted to be able to check people in, monitor who's coming in and off the job site. And so, I’m like, ‘All right, well, let’s solve that.’”

Worsley worked on the Wrecking- Ball software for a year on his own, beginning with a rudimentary version of what he officially launched two months ago.

Work began with getting a label maker and printing barcodes to be scanned with a standard barcode scanner, which would allow workers to check in. This was used at a job site but was never an official product, he said. He then continued to work on what became SafetyNow. 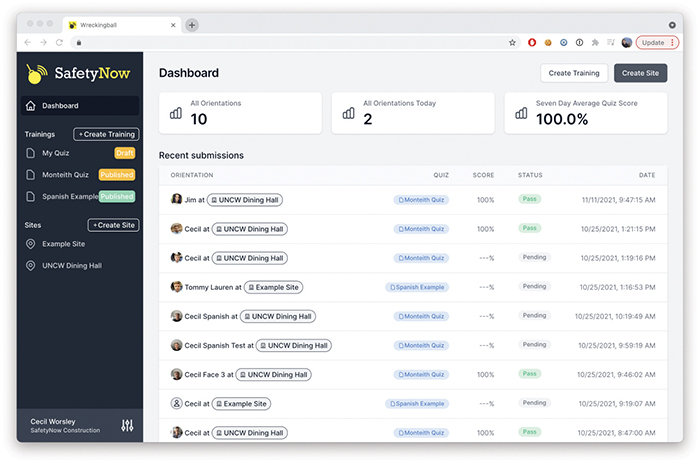 “The more I got into the commercial contractor construction space, the more I learned about the issues that they face with Occupational Safety and Health Administration (OSHA) compliance, with managing documentation, ensuring people are safe, handling the liability on the job site and I was like ‘Well, there's a real business here. There’s really something that we can go after,’” he said.

SafetyNow works through a QR code that workers coming on-site can scan and access. Users are not required to download any apps. They can then complete a safety orientation that has been created for a worksite’s specific requirements. When the tasks are completed, the documentation is saved on the software’s database.

Through the platform, the company provides ready-made orientations that can also be edited for specific needs. It keeps up with worker data to so clients can track paperwork and it is also integrated with Procore, a construction management software. Workflows can also be customized.

“From the contractor’s perspective, we give them an editor so they can go and create these presentations so they can have whatever content they want to make sure that any worker that walks in the job site needs to understand. It covers some basic liability for them both from an insurance perspective and from OSHA or Department of Labor compliance perspective,” he said.

If an accident were to happen on the job site, this would allow employers to find needed records.

“It’s a relatively simple product that solves a very important process on the job site and standardizes it not only on that job site but across the entire general contractor,” Worsley said.

While currently the product is aimed at the commercial construction industry, it does have the potential for more applications and can expand to any industries that OSHA and the Department of Labor covers including oil, mining and more.