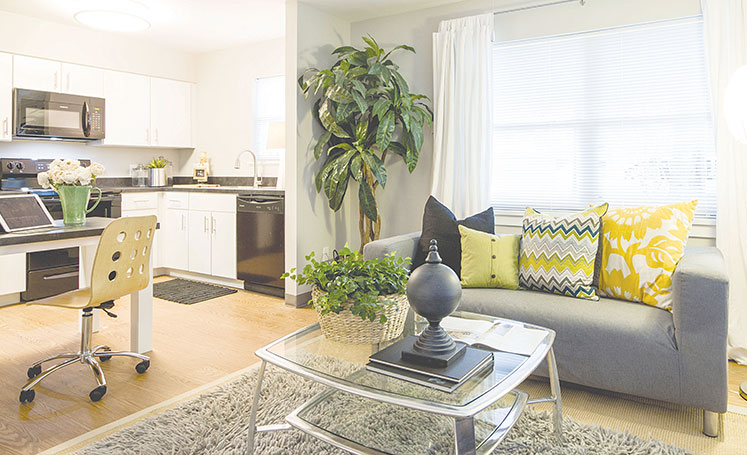 Dave Spetrino and Kyle Henry, owners of Plantation Building Corp., saw the potential for updating and enhancing the Little John Apartments in the Sherwood Village area near New Hanover Regional Medical Center. They then chose to rename it The Diamond.

While it had some deferred maintenance and was built in 1988, “the buildings fortunately were in really good shape. That’s not always the case with apartments built 30 years ago,” Spetrino said.

Plantation Building Corp. purchased the property this year and started gutting the community’s 25 units down to their framing. Crews have been replacing all the interior flooring, cabinets and fixtures. Town & Country Real Estate is managing The Diamond, and the first new residents started moving in this month.

Primarily known for custom home building, Plantation Building Corp. also invests in rental properties, mainly single-family homes and duplexes, but the company has also taken on rental community projects like The Diamond; a downtown rehabilitation project of studio apartments called The Jewel; and a new ground-up plan for small apartments and commercial space in a building at Fifth and Wooster, expected to be named The Pearl.

Though linked by their developer, The Diamond, The Jewel and The Pearl are very different from each other, Spetrino said.

But they all meet a demand he said he has noticed in Wilmington: the need for smaller apartments that don’t cost as much as a diamond each month.

“We have a waiting list for The Jewel, and that’s what induced us to look for more opportunities for smaller housing,” Spetrino said.

Rents at The Diamond start at around $700 for the studio apartments. Rents at The Jewel are a little lower. The Pearl, to be built at 724 S. Fifth Ave., is expected to have comparable rates to The Diamond.

Plantation Building Corp. bought The Jewel, which has 12 units, in 2015.

Spetrino said he expects The Pearl, which was discussed by Wilmington’s Technical Review Committee on Nov. 9, to be complete by spring or summer of 2019. The three-story Pearl will likely hold between 30 and 40 residential units, and the plans include a parking garage and some commercial space.