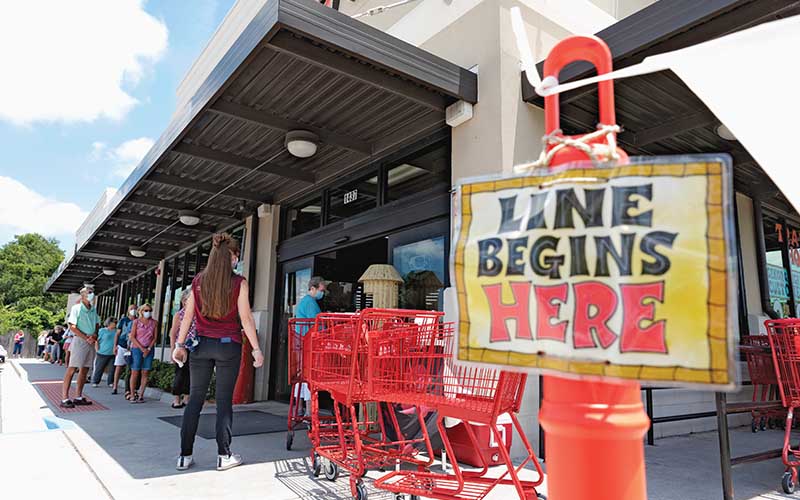 Grocery stores across the country, including the Trader Joe’s chain, are experiencing a boost during the age of coronavirus from consumers who haven’t been dining out as much – or at all – as a result of the global pandemic. They’re cooking at home, and in some cases, they’re clearing the grocery store shelves of ingredients such as rice and flour.

Customer lines are also not unique anymore at Two Wheeler Dealer, a bicycle shop that’s been serving customers in Wilmington for 45 years. During the coronavirus crisis, bikes are in high demand across the U.S.

“Any bicycle store that’s really open is selling everything they have or can get their hands on,” said Two Wheeler Dealer owner Jim Mincher. “There’s a severe shortage of bicycles in this country.”

Grocery stores and bike sellers are examples of how parts of the local and national economy seem to be thriving amidst ongoing restrictions aimed at slowing the spread of COVID-19, while other segments are quickly becoming economic victims of the crisis. But the terms “winners” and “losers” don’t necessarily apply, as some of the spending might be short-lived and added demand can come with its own complications, such as shortages. 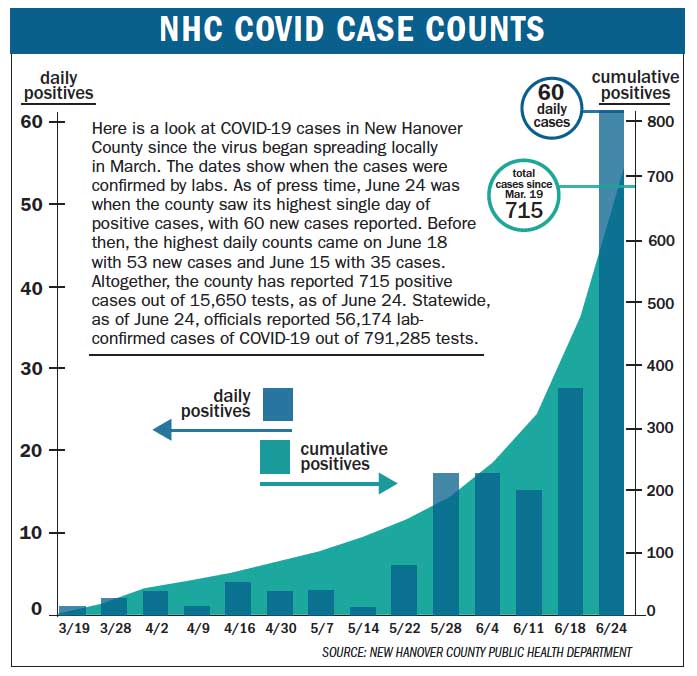 When it became clear the novel coronavirus was headed to the U.S., Mincher anticipated a slowdown in sales at his bicycle store at 4408 Wrightsville Ave. in Wilmington.

“I’m thinking, ‘Man, we might not have any business. We better just quit buying bicycles and parts. We don’t want any bills in April, May and June,’” he said.

But by April, there were so many customers in the store, Mincher’s employees became uncomfortable with the possibility of COVID-19 exposure.

“The employees said, ‘We need to go curbside. We can’t have all these people in the store,’” Mincher said. “So we set up curbside service, and then the lines were forming like we’d never seen before.”

Adam Jones, regional economist and associate professor of econom­ics with the Swain Center, UNCW Cameron School of Business, said the bike craze is a facet of a broader issue.

“The old-time management matrix of urgent versus important will be more salient than usual,” Jones, who is also a bike enthusiast, said, after being asked about the effects of the coronavirus pandemic on different parts of the economy. “For example, bike shops are slammed and selling out of bicycles, nationwide. Local shops are overrun with business.”

But urgent action, Jones ex­plained, at bike shops and sporting goods stores that might be seeing a similar bump in business is to help the customers get their bikes repaired or find new running shoes.

“However, the important action, that is extremely difficult to find time to do, is for businesses to hold onto these customers, i.e. regularly market to them to join the running club or the cycling club, mailers with routes, etc.,” he said. 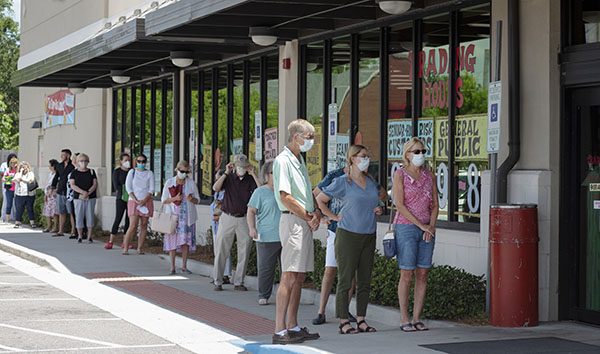 
Food retail, which includes gro­cery stores, has seen a major bump in business, with a Food Industry Association study showing that the segment’s share of food spending rose from 50% in February to 63% in March to 68% in April.

Not surprisingly, the restaurant share of the food spending market took a dive, as restaurants have had to close temporarily, change to the less lucrative carry-out and curbside service and eventually reduce dine-in capacity when some restrictions were lifted. Some national restaurant chains have declared bankruptcy, and at least three restaurants in Wilm­ington had announced closures as of June 25.

“I think there’s potential for restaurants to try outdoor dining and people to realize that a meal or craft beer outside could be another enjoyable experience,” Jones said.

Expanding upon an example of short-term versus long-term impacts, Jones said, “The boom in hair salon business is likely short term and re­flects pent-up demand, but I suspect that in a month or two, most of us will be back on a regular grooming schedule and business will settle into the normal rhythm again.”

An increase in online grocery shopping, however, is likely here to stay, he said.

“To figure out if a change is going to stick, ask yourself, ‘Has some­thing fundamentally changed about the demand for a product, and if so, what that change in demand means for local businesses?’” Jones said. “I don’t think anything has really changed about our demand for hair­cuts, but our introduction to the con­venience of online grocery shopping may have a long-lasting effect.”


The Generator Superstore, which has a showroom on Gordon Road in Wilmington, represents another aspect of the economy seeing an uptick, said owner Dan Miller.

“I’m being told by our customers that a lot of them decided, since they were going to work from home, they were going to go ahead and move forward with getting an alternate power source for their homes just in case there were power outages,” Miller said. “So normally this time of year, we’ll see about a 30% bump in business just due to people getting ready for storm season.”

But these days, as a result of the coronavirus pandemic, “I’m going to say that our increase is somewhere around 80%,” Miller said.

Miller said he sees the increased demand for generators continuing as people work from home indefi­nitely and continue to stay at home more to avoid potential exposure to COVID-19.

“I don’t see this going anywhere anytime soon,” he said.


Jones said while upticks have been observed in some industries and struggles in others, increases in activ­ity could be yet to come.

“Typically, disposable personal income rises by about 3-4% a year, but in April it was up 14%, due mostly to stimulus checks. However, personal consumption expenditures, which usually grow 4-5% per year, were down 17%,” Jones said. “An increase in income coupled with a decrease in expenditures means sav­ings is through the roof. It was 33% in April; it’s usually about 7%. This means many households are sitting on cash, and there is potential for the next wave of business booms.”

Reasons that the funds haven’t been spent yet could be that house­holds aren’t using them for new cars, vacations, cruises and children’s activities and education.

“I expect we’ll see an increase in some of these industries over the next year,” Jones said, “depending on the course of the public health crisis.”

Catching up with businesses