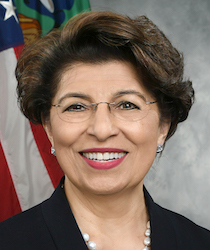 Jovita Carranza
SBA Administrator Jovita Carranza came to North Carolina on Friday with a message to the state’s small business owners: nearly $130 billion remains in the Paycheck Protection Program to help companies weather the economic challenges of the COVID-19 pandemic, and they have until Aug. 8 to apply for it.

She urged business owners to visit the agency’s website, sba.gov, for more information.

“It will be the same [program] as before; there is no change in the parameters,” Carranza said Friday morning in a telephone interview. “If small businesses do access sba.gov, they will find a lender match portal. A business that is interested in a loan will be matched with a lender that is still taking applications, that has the liquidity to do it.”

Carranza, who was in the state Friday to visit several manufacturing sites, said she hopes that the program extension will encourage small business owners who have not yet applied for a PPP loan to do so.

“Some may have been apprehensive, or thought the money would dry up,” she said. “Businesses are much more knowledgeable, much more confident about the program now.”

In her visits to businesses that received the loans, Carranza said she finds their owners have an increased level of confidence about the future.

“They applied the money appropriately or even increased the number of employees. The loans helped them take care of their leases and preserved their assets so they can weather another few months,” she said.

While there have been recent media reports about PPP loans going to large corporations, Carranza said most loans have targeted the struggling small businesses the program was designed to help. Citing SBA data, she said 45% of the loans by volume went to low-income counties, and 70% of the loans were made to companies with fewer than 10 employees.

Carranza added that more than $106 billion of the $521 billion of PPP money already disbursed went to businesses in SBA HUBZones. Counties or census tracts designated as HUBZones are economically depressed and often have substantial minority populations.

Large portions of Pender County have that designation, along with areas in northern and western New Hanover County and a small section of northeastern Brunswick County. The HUBZone map can be found here.

Designing a new lending program from scratch in a short amount of time was a huge challenge for the SBA, Carranza said, calling the effort “building a financial torpedo.”

“In the 67-year history of the SBA, the agency has never processed the amount of financial transactions or realized the number of loans,” she said in reference to the PPP lending period that began April 3 and was supplemented with a second wave of funding in late April.  “Between the EIDL (the SBA Economic Injury Disaster Loans) and the PPP, we have just done over $1 trillion in lending. Under the PPP program we helped 4.5 million businesses with a total of 51 million employees. It was a huge undertaking. The President is relying on us to sustain half of the country’s GDP.”

Carranza has led the SBA since January. She served as Deputy SBA Administrator under President George W. Bush and more recently as U.S. Treasurer in the Trump administration. Carranza had a 30-year career with United Parcel Service, working her way up from night-shift box handler to president of Latin American and Caribbean operations.