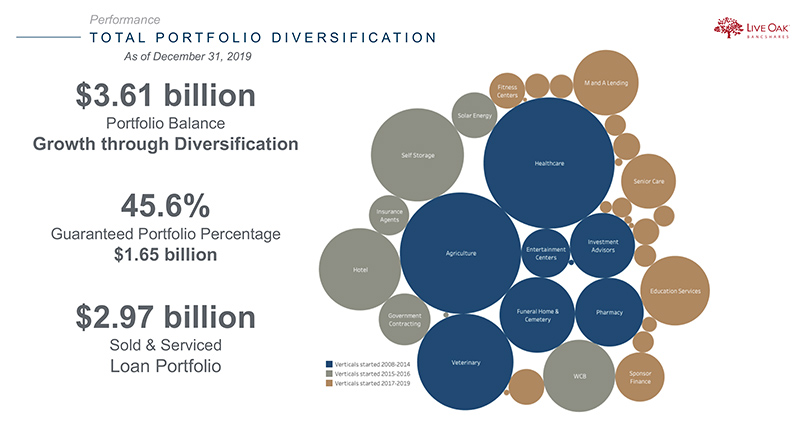 “In 2020, we will continue on the same course [as in 2019] focusing on providing capital to small business owners, the doers of the economy,” he said in response to an analyst’s question. “And with continued momentum in our core banking franchise, we will continue to focus on our future technology builds and delivering a new broad suite of products across the next-generation infrastructure.”

Garriott said Live Oak will roll out a new website, mobile onboarding servicing and more CD products in the first half of 2020. He anticipates introduction of Live Oak’s checking account offering in the second half of the year.

Bank watchers should not expect a big bump in Live Oak’s lending this year, however, according to Garriott.

“I think we largely have the lending team on the field that we want right now, and we are in … a bunch of great verticals,” he said on the call. “The generalist team is hitting their stride [in] a bunch of great markets. And so we pick up one or two [verticals] here and there maybe, but I don’t think you will see us grow the lending side to the same extent that we did last year …”

Live Oak Bank, the nation’s top SBA lender in 2019 by overall loan amount, will continue to “make all the great 7(a) loans that we can find,” Garriott continued, but will also pursue conventional lending to small businesses, where the bank sees greater opportunities.

“I think more of your incremental growth is likely to come from the conventional side. They are also a little larger credit. So they will move the needle a little bit more on a relative basis,” he added.

Live Oak will also seek to do more USDA lending, according to Garriott, who said, “We do still think there is a lot on the USDA front that we can still do as we broaden out across all of the different programs they offer.”

“In the SBA space, in 7(a) lending, we are proud once again to be the nation’s largest SBA lender this year extending our lead in that category, the testament to our model, which combines deep vertical expertise and efficient technology platform and the dedication of our people to serve the nation’s small business owners and entrepreneurs,” he said. “We also ended the year on top of the USDA lending list, which is an area where we continue to see a lot of opportunity, especially with some of the changes in the recent farm bill.”

Its Q4 report, released Jan. 22, showed net earnings available to common shareholders of $6.8 million, or $0.17 per diluted share, $0.04 more than analysts had predicted, although off from those of the fourth quarter of 2018, when net earnings totaled nearly $10.5 million. Other numbers the officials noted:

“Live Oak’s performance in 2019 was highlighted by strong growth, recurring revenues and profitability since making a strategic pivot a year ago to hold more loans on our balance sheet,” Chairman and CEO Chip Mahan said in a January earnings news release. “The fourth quarter showed strength across all key metrics, and we aim to continue that momentum in the quarters to come. In 2019, total assets grew by more than $1 billion and our deposit model successfully fired on all cylinders. We believe in our model and will continue to embrace innovation in financial technology while demonstrating a relentless dedication to American entrepreneurs who support our economy.”

Mahan offered a short recap of accomplishments during the earnings call.

“The loan portfolio grew 43%. Credit quality improved. Net interest income was up 32%,” he said. “And most importantly, we grew the government guaranteed book from $357 million to almost $1 billion.”