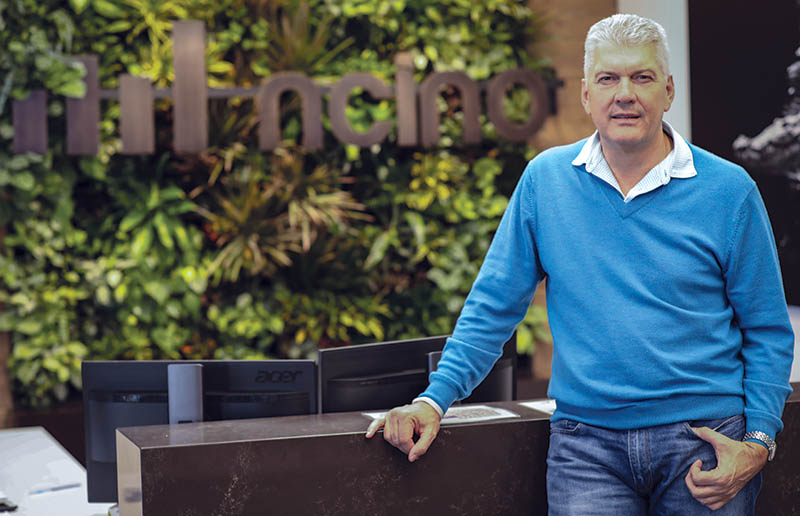 In less than a decade, nCino officials and CEO Pierre Naudé (above) have grown the Live Oak Bank spinoff to include hundreds of employees and a lengthy list of financial institutions that use its Bank Operating System. (Photo courtesy of nCino)
Pierre Naudé will tell you he doesn’t like talking about himself; he much prefers talking about the company he leads: banking software producer nCino. And there is plenty to talk about.

Since Naudé was named CEO to guide nCino’s spinoff from Live Oak Bank in 2012 as a separate tech entity, the company has grown its client portfolio to 250 financial institutions, 12 of which are international banks representing about 6 percent of nCino’s business. It employs about 600 people globally. In addition to occupying 131,500 square feet of office space in various Mayfaire-area buildings, the company maintains offices in London, England and Sydney, Australia.

“Our international growth rate will be double that in the U.S. going forward,” said Naudé, the keynote speaker at the March 27 WilmingtonBiz Conference & Expo luncheon at the Wilmington Convention Center. The event is presented by the Greater Wilmington Business Journal.

The lunchtime Q&A, titled “Wilmington’s Unicorn,” is a play on the reference in Silicon Valley and other technology hubs where “unicorns” are the rare species of privately held startups valued at more than $1 billion.

Naudé, who will talk about the company’s growth and future, points out that nCino is aggressive in pursuing its international expansion.

Push a bit and Naudé will talk about his personal story. Although his name may sound Gallic, he is South African by birth and claims not to speak a word of French. He was born into an Afrikaans farming family that grew wine grapes and raised dairy cattle in a vast landscape of rolling hills dotted with tidy farms. But farming was not in his blood.

“I finished high school and went into the military,” he said. “Normally, sons of farmers go into farming, but I started working in a bank.”

The young Naudé showed an aptitude for banking, and he had the opportunity to travel to the U.S. for work a couple of times. He decided that he wanted to build his career in the States, but also knew to excel in the U.S. he would need an American college degree. So while holding down a banking job, he put himself through night classes at Upper Iowa University and earned a bachelor’s degree in finance and management in three-and-a-half years there.

“Those management lessons I apply every day,” he said.

Prior to being tapped to head Live Oak Bank’s technology seedling, Naudé was group president of U.S. Branch and Community Financial Business at Atlanta-based S1 Corp. He had been in global senior management at Unisys Corp. before that.

The original vision for nCino was to offer Live Oak’s banking software to other mid-size financial institutions. The Bank Operating System was designed to be a comprehensive and secure cloud-based system that would enable a user bank to increase its transparency, efficiency and profitability, while ensuring regulatory compliance. The system was built on the Salesforce platform.

“Our target market is the traditional community banking market: banks and credit unions with assets between $1 billion and $10 billion,” Naudé said in June 2012. “This is a market size of roughly 1,500 banks and credit unions in the United States. We are evaluating a strategy to make this software available to large financial institutions as well.”

Four years later, when it had enlisted about 50 community banks as customers, nCino entered the larger bank market. Its first two customers in this category were SunTrust Bank and Bank of the West, both large regional institutions. That upmarket move, Naudé said in August 2016, “truly changed the trajectory as well as the long-term growth prospects of the company.”

Several funding rounds have yielded more than $150 million for the young company.

Its Bank Operating System, originally designed to expedite the commercial loan process, has expanded into other transactions, including retail banking functions such as deposit originations and customer onboarding.

“We are creating the agile enterprise,” Naudé explained, adding that banks that use nCino’s software can be very flexible about their processes and become very organized. But the vision has evolved.

“We believe the next phase will be all about the intelligent enterprise,” he continued. “Every stage of every product will be enhanced through AI [artificial intelligence], machine learning, robotics and analytics. Banking is going from product-based to relationship-based.”

nCino’s business may be technology, but its internal culture focuses on people: giving them the tools they need to succeed and recognizing their achievements.

“One of the things we’ve done to preserve our culture is that we hire from within,” said chief revenue officer and executive vice president Josh Glover. “Pierre motivates people. You can be anything you want to be at nCino. We find a person with the right attitude and aptitude; we’re willing to make investments in people. There are few easy [personnel] fits in this market, but we take the long view. We’re fortunate to have investors who have given us a strong financial position.”

Naudé said he bases his management of others on how he would want to be treated. It involves providing opportunity and recognition, knowing how much freedom to give an employee and managing the learning experience when that employee makes a mistake, he said, adding, “If you have the right cultural balance, it will propel your company to unbelievable heights.”