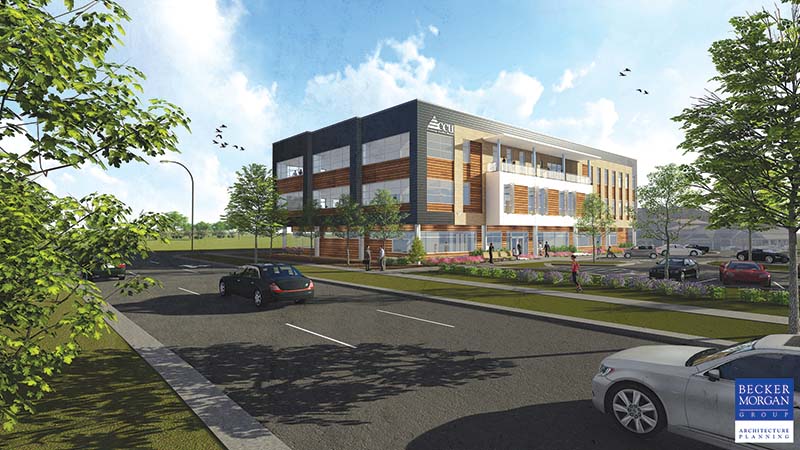 That growth could be measured in several ways. Among those are increased local market share, greater assets, a larger local footprint, more employees and fatter commercial lending portfolios.

Two area banks grew through mergers that were completed in early 2018. CresCom Bank finalized its merger with First South Bank, bringing its number of area branches to seven and augmenting its assets to $3.5 billion.

South State Bank acquired Park Sterling Bank in a merger that closed in April. That transaction increased South State’s assets to $14.5 billion and added one branch location in Wilmington.

Corning Credit Union, which is steadily growing its membership, deposits and lending, also increased its footprint, opening a service center in Hampstead in June.

The New York state-based credit union also broke ground in May on a new regional headquarters, located on 17th Street Extension. The new 43,000-square-foot, three-story facility is the credit union’s only headquarters outside of its home base of Corning, New York.

The ground floor will house a branch office, replacing the one nearby on 17th Street Extension. Credit union support offices will occupy the second and third floors.

“Our new regional headquarters will serve our more than 23,000 members who live and work in the Cape Fear region,” CCU president and CEO Gary Grinnell said in the credit union’s announcement at the time.“In addition, it will position us for additional growth and give us the capability to add over 100 jobs over the next five to 10 years.”

Commercial lending was strong, as evidenced by reports from three banks at the end of the third quarter of 2018.

PNC, for example, added another commercial banker early in the year to handle increased demand.

That increase was seen in both numbers of loans and loan amounts, and was partly a result of the South State-Park Sterling merger, Tyler said.

Even some smaller banks saw growth in commercial lending. Sound Bank, with one office in Wilmington, has more money to lend since its merger in 2017 with West Town Bancorp. Its sign is up on several real estate projects in town.

In terms of deposits in the Wilmington market, most banks here logged growth. But three of the larger banks among the 20 in the local market – Wells Fargo, TD and PNC – saw their in-market deposit totals shrink between mid-year 2017 and mid-year 2018, according to the annual FDIC report, which shows deposit totals as of June 30. A fourth, BB&T, had in-market deposits that remained essentially unchanged.

nCino, which produces the Bank Operating System used by Live Oak Bank and an increasing roster of other financial institutions, now employs about 600 people.

In February, nCino announced it had raised nearly $51.5 million in capital to support continued growth. Apiture, a joint venture between Live Oak Bancshares and Atlanta- based First Data, set up shop in Wilmington in late 2017.

The firm has rolled out two new products this year and, according to spokeswoman Lauren Tilghman, has seen its Wilmington-based workforce grow to 91. An additional 41 employees work in the company’s Austin, Texas location.

Live Oak, the only bank based in Wilmington, experienced steady growth this past year.

The bank’s net deposit accounts grew 115 percent between the third quarter of 2017 and the same point in 2018, officials said.

In fiscal year 2018, Live Oak, which named Huntley Garriott as the bank’s new president last year, was the No. 1 SBA lender by volume in the United States.

It was also, according to officials, the highest volume lender in the U.S. for the U.S. Department of Agriculture’s 2018 Rural Energy for America Program (REAP) and Business & Industry (B&I) loan programs, combined.

Currently, Live Oak employs more than 500 people and offers its various lending products to 22 industries. That array of “lending products” is growing, as the bank announced in late November.

“Live Oak is building on its model to provide small business owners financial solutions to grow their business,” a news release stated, adding information on three areas of expansion.

Along with the SBA loans on which Live Oak Bank has largely built its enterprise, the bank “is now providing conventional loans for commercial real estate projects including office and industrial buildings, retail centers, medical buildings, apartments and student housing,” the release stated.

A second area of growth for the company is providing conventional asset-based lending products to small- and medium-sized companies across the country.

“The team is dedicated to lending money to companies with high-quality receivables that may need capital over their business operating cycle,” the release stated.

Senior loan officer Chris Lehnes is leading the asset-based lending unit. He brings more than 25 years of experience in this field, as well as experience in small business lending.