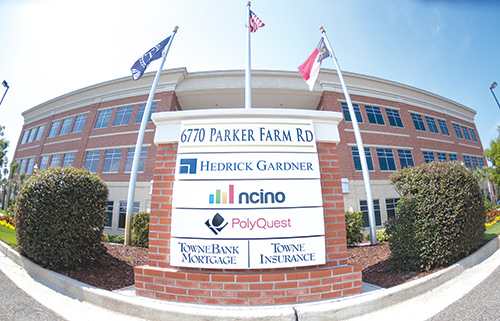 nCino now occupies about 40,000 square feet, spread across two floors, at its new Mayfaire-area location in the former Wachovia bank building. The space will accommodate up to 250 people, according to nCino spokeswoman Kathryn Cook. Currently the company has about 150 employees.

“We are excited to be at this building at Parker Farm, and it should fit our needs for the next several years,” Cook said.

The company was founded in early 2012 as an offshoot of Live Oak Bank with an eye to market the banking software developed within Live Oak. Over the past year, according to Live Oak Bank’s recent S-1 filing with the Securities and Exchange Commission, Live Oak has divested itself of its ownership of nCino, although some of the bank’s directors, officers and employees own more than one-quarter of nCino’s outstanding common stock and Live Oak Bank chairman and CEO James S. “Chip” Mahan III continues to serve on nCino’s board.

nCino’s growth has been steady, and officials expect that trend to continue, Cook said.

“nCino’s customer portfolio consists of approximately 90 financial institutions across the United States ranging from $150 million in assets to our largest customer, SunTrust, with nearly $200 billion in assets,” she said.

In its first three-plus years, nCino occupied a portion of Live Oak Bank’s leased space on Iron Gate Drive, taking over more and more of that space as it grew and the bank moved to new quarters on Tiburon Drive.