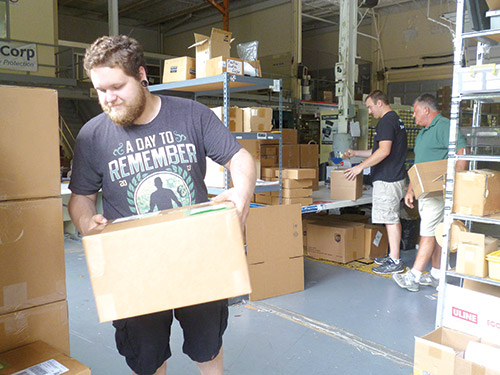 Dry Corp employee Kris Parker stacks boxes of waterproof cast covers ready for shipment. With the help of Ex-Im Bank, the Wilmington company has been able to expand its business internationally. (Photo by Jenny Callison)
As the deadline for reauthorization of the U.S. Export-Import Bank draws near, lobbying efforts have intensified on the part of supporters and opponents of the agency.

Created in 1934, the Export-Import Bank – Ex-Im for short – facilitates the export of U.S. goods, filling a financing void where private sector financing is not an option, according to the agency’s website. Authorization for the bank, the official export credit agency of the United States, is set to expire on June 30.

While a recent test vote in the U.S. Senate indicates that reauthorization has sufficient support in the chamber to pass, Ex-Im’s future is less certain in the House of Representatives, where numerous members have said they will not vote to renew the bank’s charter.

One such member is U.S. Rep. David Rouzer (R-N.C.). Responding to a letter from GE Aviation and GE Hitachi officials requesting his support for reauthorization, Rouzer wrote, in part, “I have strong concerns about this program largely because I do not like the prospect of U.S. taxpayers financing the purchases of foreign governments who are adversary to our national interests. Many of them have a horrific human-rights record and are adversarial to our values as well. As a result, I plan to vote against reauthorization should it come before the House.”

GE Aviation and GE Hitachi employees held a rally June 16 at the Wilmington site to voice support for the Ex-Im Bank’s reauthorization.

Conservative groups such as Americans for Prosperity have come out against Ex-Im Bank. In a recent news release, the organization said it has “aggressively opposed reauthorization of the Ex-Im bank,” citing its lack of transparency, culture of corruption, cost to taxpayers and lack of public support. Americans for Prosperity recently launched new efforts urging members of Congress to oppose reauthorization, according to the release.

“For too long American taxpayers have been on the hook for billion-dollar loans to politically connected corporations,” Americans for Prosperity officials said. “With a recent Export-Import Bank employee recently pleading guilty to bribery and over 30 open cases of fraud, the time has come to end this deeply flawed institution. We applaud Senator Shelby who is standing up for fiscal responsibility and the hardworking taxpayers against corruption and cronyism. We urge his colleagues in Congress to follow his lead.”

Americans for Prosperity also opposes the Ex-Im Bank because the group claims that “American taxpayers have been on the hook for billion-dollar loans to politically connected corporations.”

Others, however, argue that the bank has been a useful mechanism.

“The U.S. has lost no money on Ex-Im Bank, ever,” said Connie Majure-Rhett, president and CEO of the Wilmington Chamber of Commerce.

Information on the U.S. Chamber of Commerce website states that Ex-Im, after paying expenses, returned $674.7 million to the U.S. Treasury in 2014.

Since 1990, the bank returned to the Treasury more than $7 billion more than it received from Congress for program and administration costs, chamber officials said. Since the bank was chartered in the depths of the Depression, borrowers have defaulted on less than 2 percent of loans it guaranteed, according to the chamber, which also reports that nearly 90 percent of Ex-Im Bank’s 3,700-plus authorizations in 2014 “directly served U.S. small businesses, which accounted for one-quarter of authorizations by dollar volume.”

That means that three-quarters of authorizations, by dollar volume, were to large companies. That, to many Ex-Im detractors, looks like corporate welfare, a major issue in the reauthorization debate, according to Alex Viva, an international business development counselor for the Small Business & Technology Development Center based at N.C. State University in Raleigh.

“The Ex-Im Bank has been given nicknames over the years, such as the Bank of Boeing,” he said.

While it’s true that a few large companies, such as Boeing and GE, have used the greatest portion of the bank’s resources, mainly to extend credit for large purchases to foreign customers who can’t obtain financing in their own countries, Viva emphasized that the majority of Ex-Im’s transactions are on behalf of small-to-mid-sized companies.

“Exports are an important part of our economy. Our balance of trade is typically negative, and with today’s strong dollar, U.S.-made products become more expensive for [customers in] foreign countries to purchase,” Viva said. “North Carolina has been growing in exports, however, going from $29 billion in 2013 to $31 billion in 2014.”

More customers mean more sales, and that increase translates to more jobs. Viva added that international sales are especially important to U.S. companies whose products are seasonal.
“If their market is limited to the U.S., their employment is seasonal.

If they expand, they can stretch out their seasonality, smooth out their sales and keep their labor force,” he said.

Wilmington-based Dry Corp LLC is one example. Its DryPro unit’s waterproof protectors that cover casts, bandages and other medical devices on the body are in high demand during warm months when people are in and out of the water. Ex-Im Bank assistance enabled the company to start selling to customers in the Southern Hemisphere, expanding its peak sales periods.

DryPro now sells to customers in 50 countries, many of which are south of the equator, said Dry Corp CEO Roy Archambault.

“Many countries, like those in Africa and the Middle East, have high tariffs. We typically would not sell to them unless we received a cash wire,” he explained, adding that many new customers are not willing to send cash before receiving the goods.

Payment guarantees from Ex-Im Bank have solved the problem, he said.

If the Ex-Im Bank is allowed to expire, jobs will be lost, including jobs in the Wilmington area,
Majure-Rhett said.

“If you look at the proportion of what GE Aviation and GE Hitachi produce, they are big things, and there has to be a financing vehicle allowing people to buy their products, and in a lot of countries, that’s not there,” she said. “Through Ex-Im Bank, they can extend credit to purchasers of what they are exporting.

“If they lose customers, they lose jobs, and we lose jobs as a community.”

Analysts say successful IPO could bring many benefits to nCino