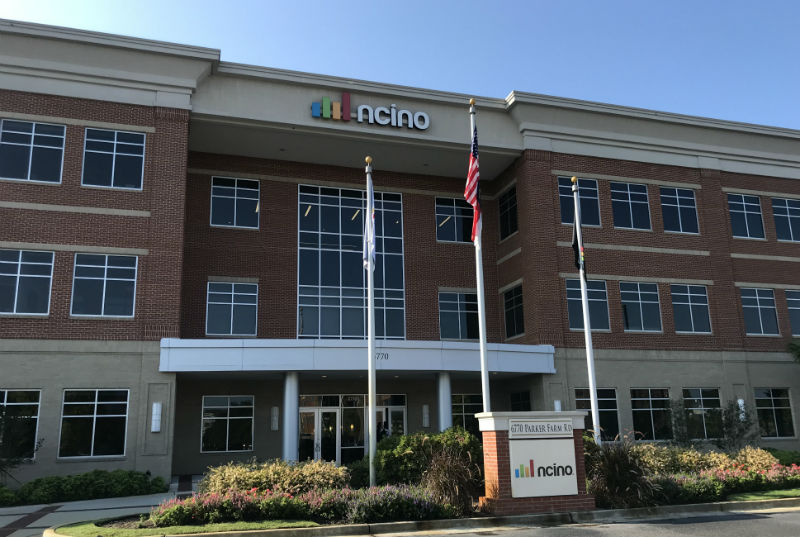 nCino intends to list its stock on Nasdaq under the ticker symbol "NCNO.” The number of shares to be offered and the price range for the proposed offering have not been determined, according to an nCino press release.

The growing fintech firm spun out of Wilmington-headquartered Live Oak Bank as its own independent fintech company in late 2011 and has seen rapid growth ever since. In early October 2019, nCino announced it had raised $80 million, with T. Rowe Price Group and Salesforce Ventures leading the funding round. nCino officials said the capital would be used for product innovation and global expansion.

The firm, which is a provider of cloud-based software for financial institutions, has filed a registration statement on Form S-1 with the U.S. Securities and Exchange Commission for the proposed offering. Reached Monday, company officials said that SEC regulations prohibit them from commenting further.

Currently, nCino employs more than 900 people and has international offices in Tokyo, London, Sydney and Toronto. The company also has an office in Salt Lake City.

Money raised from the IPO will be used “for general corporate purposes, including working capital and capital expenditures such as additional office facilities,” the filing stated, adding, “We may also use a portion of the net proceeds to acquire, invest in or obtain rights to complementary technologies, products, services or businesses. There are no such transactions or agreements at this time.”

Adam Jones, a regional economist who works at the University of North Carolina Wilmington, said the IPO could provide a boost to the local economy.

“When a company goes public investors are able to either cash out their ownership positions or it is easier to do so in the future meaning those funds are able to be reinvested into other ventures, essentially it’s an inflow of investment funds to the region,” he said.

And the more publicly-traded companies in the region, the more it will help to draw the attention of investors and other companies to the area, he said.

A public offering would add nCino to a short list of publicly traded companies based in Wilmington. Live Oak Bank debuted on Nasdaq in mid-2015, and contract research organization PPD raised $1.62 billion in its IPO in February.

“Our goal as a region should be to demonstrate that we have the human capital, educational system, and business infrastructure to support investment, nCino going public helps us send that signal to the broader market,” Jones said. “The signal is even stronger in the fintech space and the inflow of funds may create the opportunity for spinoffs to get rolling and build momentum behind the local fintech cluster.”

At the end of its 2020 fiscal year, the firm has more than 290 financial institutions utilizing its Bank Operating System “for client onboarding, loan origination and/or deposit account opening, of which 161 each generated more than $100,000 in annual subscription revenues in fiscal 2020,” stated the prospectus. Twenty-one of those customers pay more than $1 million in subscription revenue.

The company also had another 890 financial institutions that use a portfolio analytics solution nCino uses through artificial intelligence tools after it acquired Visible Equity last year.

nCino’s customer base ranges from global financial institutions such as Bank of America, Barclays, Santander Bank and TD Bank, to enterprise banks, such as KeyBank, Allied Irish Bank, Truist Bank, according to the filing.

nCino’s growth is an example of how fintech and other technology companies can be successful in the Wilmington area, said Natalie English, president and CEO of the Wilmington Chamber of Commerce.

“As Live Oak [Bank], nCino and Apiture are increasingly rolling off the tongues of the financial services industry, those folks, as they're looking for places to expand, Wilmington becomes more obvious to them than it might have before,” English said, adding that the area is also developing that tech workforce.

The chamber has identified the fintech industry, in general, has a high growth potential for the area, she said.

“They can be located anywhere and do the work that they do. And that’s evidence by Live Oak Bank's work all over the world, especially in the United States,” English said. “And then, nCino opening offices all over the world to do the work that they do with financial institutions. We believe it is a great opportunity for us to grow our economy. It's one of the industries that we target, if you will, for growth.”

English said the growth of nCino and other companies such as Live Oak Bank and Apiture, a joint venture between First Data Corp. and Live Oak Bank, reflected the quality of work and place in the area.

“It’s exciting to see a company that was sparked here in Wilmington now grow to the state of having an [proposed] initial public offering,” English said. “The thought that we could be looking at stock exchange numbers that include one of our companies and its growth is reflected in that.”