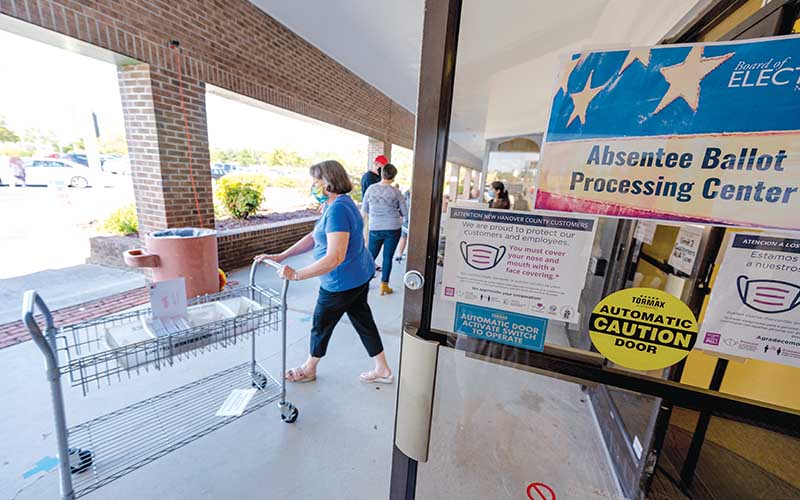 Like everything about 2020, this year’s elections are a little more com­plicated than they used to be, and there’s a lot at stake in the outcome.

Absentee ballots are a major topic of discussion this year, as more vot­ers opt to avoid the voting crowds on Nov. 3, Election Day, because of the coronavirus pandemic.

That means changes for local boards of election and election offices.

“I think every county board had to adjust their operations accord­ingly to ensure that they had the capacity to manage the absentee by mail voting process and the expected increase in volume,” said Rae Hunt­er-Havens, elections director for New Hanover County.

To accommodate space needs, “the county allowed us to use the vacated suite next door for an absen­tee ballot processing center,” Hunt­er-Havens said of the election board offices at the county government complex off South College Road. “That space was recently vacated by the veterans affairs office.”

As of Oct. 9, more than 440,000 people had cast absentee ballots in North Carolina, more than 13,000 of those in New Hanover County, according to the N.C. State Board of Elections absentee vote count.

But the ballots aren’t the only remarkable aspect of this year’s election. North Carolina is a battle­ground state, meaning the presiden­tial vote is up for grabs.

Drilling down further, New Ha­nover County specifically is a toss-up, according to a New York Times opinion piece about 10 bellwether counties in the U.S.

According to the article, New Hanover County hasn’t voted for a Democrat for president since 1976. But that doesn’t mean Trump will win this year because the county has a lot of the types of voters that have been gravitating toward challenger Joe Biden, the article stated.

Other contests to watch locally include the New Hanover County Board of Commissioners race and the state rematch between Sen. Harper Peterson, D-New Hanover, and former senator Michael Lee.

A race that could affect the U.S. Senate has run into some potential October surprises. Incumbent U.S. Sen. Thom Tillis, R-N.C., is being challenged by Cal Cunningham, a Democrat and lieutenant colo­nel in the U.S. Army Reserve. In recent weeks, Tillis tested positive for COVID-19, and Cunningham became embroiled in allegations of sexting and an extramarital affair.

North Carolina’s U.S. Senate race is drawing even more attention because it could decide which party controls the Senate.

King pointed out that not only have some people already voted via absentee ballots, but voters also in general might justify whatever news story is out there about a candidate they support to continue to support that candidate no matter what.