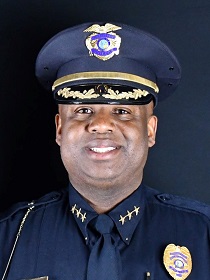 "As interim, Chief Williams has navigated the police department through the COVID-19 crisis and the protests that have occurred in the wake of the killing of George Floyd. He exemplifies the city’s core values of service, professionalism, respect, integrity and safety," city officials said in the release.

Williams, a native of Wilmington, has worked at the Wilmington Police Department for more than 29 years. He was sworn in as a police officer in December 1992.

He has served in various aspects of patrol and specialized assignments, including crime prevention, DARE and housing. He is also credited with expanding the department's Police Activities League, which now includes four youth sports: basketball, soccer, wrestling and cheer and dance.

As a police captain, he managed the department's support services division where he oversaw the agency’s $24 million budget for several years and the agency’s largest patrol division, stated the release.

He also was over the special investigations and criminal investigations divisions as a deputy chief. In addition, he oversaw the design, development and completion of the Haynes-Lacewell Police and Fire Training Facility, stated the release.