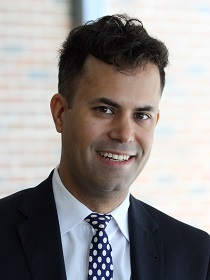 Shane Fernando
Shane Fernando has been appointed as vice president of Advancement and the Arts at Cape Fear Community College.

The CFCC Board of Trustees made the appointment at its meeting Thursday, according to a news release.

Fernando was named interim vice president of Advancement and the Arts on June 1, after six years of leadership at CFCC’s Wilson Center.

“I am thrilled to take on this new leadership role with the Cape Fear Community College Foundation. At the Wilson Center, a major focus of our work has been supporting and developing opportunities to engage students during their experience at CFCC through education, employment, service, and advocacy. In my new role, I will work with our team to connect students with scholarship opportunities that will help them focus on their studies and increase their opportunities for lifelong success - without the burden of overwhelming student debt," Fernando said in the release. "I’m excited to explore ways area residents can become more involved at CFCC and help our students achieve their academic and career goals.”

As Vice President of Advancement and the Arts, Fernando will serve as artistic director of the Wilson Center and oversee donor relations and direct fundraising for the college at large through the CFCC Foundation, the college stated in the release.

Fernando created CFCC’s Broadway for a Better World Program, according to the college. He is also an experienced and successful grant writer.

“Shane brings great enthusiasm and energy to his work. His dedication has enriched our entire community. We are excited to see what he will achieve in this role, and are certain that his hard work and leadership will benefit our students for years to come,” said CFCC President Jim Morton in the release.

Fernando actively serves in many community and national roles for the arts, which include fundraising and development oversight, stated the release.

He is a trustee for the Thalian Hall Center for the Performing Arts. Fernando serves on the advisory committee for the Master of Public Administration program at the University of North Carolina Wilmington.

And at the state level, Fernando serves as president of the N.C. Presenters Consortium. He also is serving on the Gov. Roy Cooper's COVID-19 task force for planning the re-opening of the state's performing arts venues.

Fernando earned a bachelor's degree and a master's degree at the UNCW.