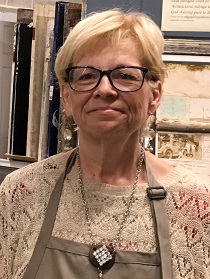 Deborah Helms
Legacy Architectural Salvage, a project of Historic Wilmington Foundation, announced that Deborah Helms has been hired as its new assistant manager.

Helms is passionate about promoting Legacy Architectural Salvage (LAS) as Wilmington's source for reclaimed wood, doors, windows and other architectural salvage to use in the renovation and repair of older homes, according to a press release. She believes in the role of architectural salvage in environmental sustainability through the reuse and repurposing of historic salvage.

LAS has tripled its retail space and added part-time staff in just the two years since it opened to the community in September 2015, officials said in the release.

In addition to Helms’ strong commitment to the resale and repurposing of local architectural salvage, she uses her talents as an artist to give salvaged items and materials a new life as home décor, mixed media art and assemblage jewelry, the release stated.

Legacy offers a unique blend of architectural salvage and reclaimed wood as well as some vintage items. Old house contractors, do-it-yourself homeowners and artists with an eye for repurposing these items have all helped fuel the growth of the operation, officials said.

The foundation’s architectural salvage operation is located at 1831-B Dawson St. at the back of Stevens Hardware. The store is currently open Saturdays from 9 a.m. to 1 p.m. and by appointment during the week.

Helms' hiring will allow the foundation to expand hours of operation in the near future, officials said.