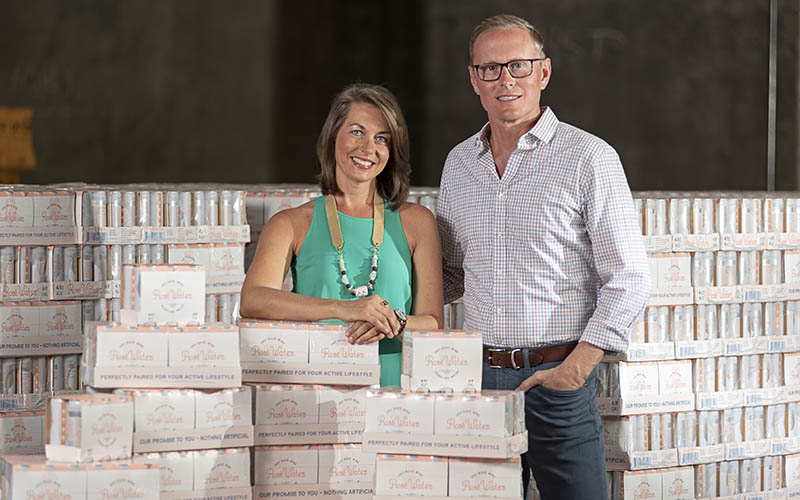 Amy and Rob Kuchar, creators of Rosé Water, plan to roll out additional varietals and blends over the next two-three years. (Photo by Michael Cline Spencer)
Agriculture, clean water and wine are three things that local entrepreneurs Amy and Rob Kuchar are passionate about.

Rob hails from a rural farming community on the outskirts of Flint, Michigan, while Amy grew up in downtown Flint, a city known lately mostly for its water quality issues.

The Kuchars started a small Charlotte- based wine distribution company in 2006, and over the next decade, their business evolved into two main companies: Executive Bev, a global wine supplier, and Boutique Bev, a boutique beverage company that specializes in designing brand concepts, brand incubation and helping small, family-owned wineries around the world increase their distribution.

Rob Kuchar explained that while many of these small, family-owned wineries want to expand their distribution, they also want to keep their focus on the winemaking and not have to deal with the business side of things.

“They are experts at cultivating grapes for wine, and that’s where their passion lies,” he said. “They want to stay in the vineyards. They don’t want to be on sales calls or developing marketing plans.”

Rob Kuchar said that’s where he comes in. Being from a farm town himself, he envisioned becoming an ambassador for small farmers growing grapes for wine.

“The wine industry is very much an agricultural industry,” he said.

Over the past several years the Kuchars have created a portfolio of about 35 wines and have developed close relationships with winemakers across the globe. Their most recent product to hit the market is Rosé Water, a wine-water water hybrid.

A couple of years ago, the Kuchars started brainstorming ideas for a light, refreshing wine-based beverage that was free of additives.

“Amy and I are definitely wine people, but unfortunately wine isn’t really an on-the-go beverage,” Rob Kuchar said. “And Amy really wanted a lower-alcohol beverage that she could drink at the pool or on the boat.”

He said that like Amy, many consumers have become more health conscious over the past decade. The alcoholic beverage industry has responded to this trend with lower alcohol beverages such as ultra-light beers and hard seltzers.

“We began experimenting with blending rosé and water at home,” Rob Kuchar said. “We had some pretty good success with it and felt like we might be on to something.”

So the Kuchars reached out to two French wineries and asked if they would be interested in getting involved.

“Initially they thought I was a lunatic,” Rob Kuchar said. “But the more we talked, the more they understood that we weren’t talking about diluting their wine, we were talking about blending it with water.”

The Kuchars and their winemaking partners spent nearly two years experimenting with grape blends and a variety of waters before arriving at the blend of French pinot noir, gamay and cabernet franc grapes produced in the heart of the Loire Valley that are blended with sparkling water sourced from the Austrian Alps.

“This is a very handcrafted product,” Rob Kuchar said. “It’s quite a bit more difficult than it seems. Wine drinkers like balance and a consistent profile, and that is what we set out to achieve.”

Because the Kuchars are clean water activists, selecting the purest possible water was also a top priority. Once the grapes are blended, they travel seven hours from France to the Austrian Alps, where the wine is blended, canned and shipped to Wilmington for distribution.

The hybrid is 69 calories per serving, 4.9% alcohol by volume (ABV) and contains no added sugar, flavorings or preservatives.

The Kuchars anticipate wine-water hybrids to be a new category of beverages.

Lighthouse Beer and Wine of Wrightsville Beach was the first retailer in the country to carry the product, selling 55 cases the first week. The product’s first restaurant partner was 1900 Restaurant and Lounge in Lumina Station. The Kuchars said several area breweries are now carrying the product as well.

Rosé Water is sold in six packs of 8.5-ounce cans ($12.99-$16.99) as well as individual cans ($2.99+) at select retailers in more than 15 states across the U.S., including North Carolina, Maryland, Massachusetts, South Carolina, California and Illinois.

Locally it can be found at Harris Teeter, Lowes Foods, Whole Foods and independent bottle shops such as Palate, The Brewer’s Kettle and Fermental. Plans call for the wine-water hybrid to be in more than 60 markets across 48 states by the end of 2020.

In keeping with their commitment to clean water initiatives, the Kuchars plan to donate 5% of all Rosé Water sales to Cape Fear River Watch, a local nonprofit organization dedicated to the improvement and preservation of the health, beauty, cleanliness and heritage of the Cape Fear River basin.

“The wine industry has attempted to figure out many ways over the years to defend and grow their market share in the adult beverage category but ended up creating products that were inexpensive and artificially flavored, so they were quickly outdone – for example, wine coolers in the ’90s and now spiked seltzers,” Rob Kuchar said. “Bottom line, the scale at which the larger industry operates opened the door for the introduction of something truly unique, and we couldn’t be more excited by the response we’ve received to Rosé Water.”