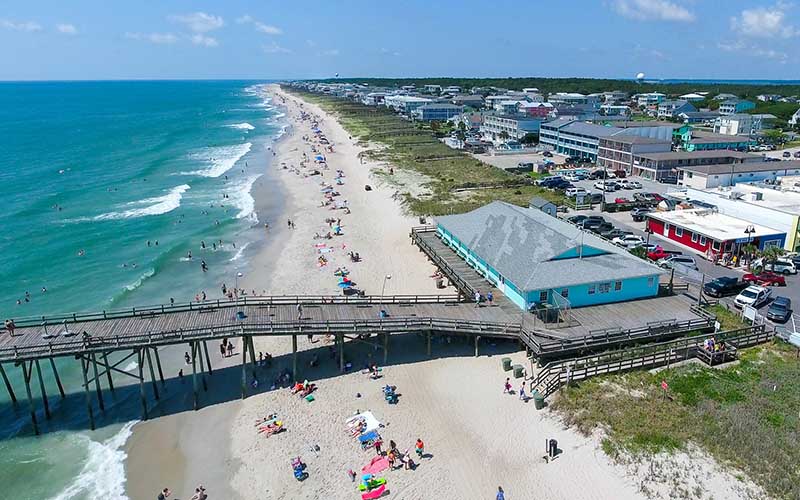 Local and state officials for years have discussed the school calendar dates that balance educational goals with tourism activity, especially for the heavily traveled month of August. (Photo c/o WBCVB)
Summer is about fun in the sun and relaxation for many people, but in North Carolina, that translates to big business. Incidentally, that business is also what allows residents to enjoy what they love most about the area.

Last week, the New Hanover County Board of Education decided not to make any changes to the 2020- 2021 school year calendar, keeping the start date at the end of August and end date in mid-June.

And although the calendar is staying the same for now for the county schools, it’s an ongoing issue that tourism and school officials grapple with.

“It [a calendar change] does not just have a negative impact on the tourism economy, but on the workforce. A lot of businesses rely on students, as well as teachers who rely on that extra income during the summer months,” said Kim Hufham, president and CEO of the New Hanover County Tourism Development Authority.

Hufham referred to Jungle Rapids as an example of a popular tourist attraction that employs many high school students as well as teachers during summers, and how an earlier start date would have had a negative impact on their ability to operate without their workforce.

The largest impact involves occupancy taxes from tourist stays at hotels and other lodgings. The tax contributes to the county’s overall budget, and shifting the school calendar to an earlier start date in early August would translate to less revenue for the county, tourism officials said.

“The occupancy tax pays for beach renourishment, and if we didn’t have that, the beaches would not be as appealing,” said Wilmington Area Hospitality Association board member Jean Guinup, of GC Communications. “Then there would be the loss of sales tax revenue. It’s what they call the multiplier effect, meaning it’s not just hotels and restaurants that would be affected, but the local CVS pharmacies, grocery stores and gas stations who all stand to lose.”

New Hanover County holds the eighth spot in North Carolina in terms of tourism expenditures, and is in second place for coastal counties, Hufham said. Tourism officials argue that losing revenue can lead to budget shortfalls with a clear connection between loss of revenue and a possible effect on property taxes.

August is the second-biggest vacation month in North Carolina, and room occupancy was up 22% last year with an increase of 4.83 % in the month of August alone, according to Guinup.

“You take away two weeks of August, one of our busiest months for tourism, and you’re going to have a negative effect on the money coming in,” Hufham said. “We still have a lot of visitors coming in, especially from up north where students don’t go back to school until after Labor Day.”

In 2002-2003, certain state tourism groups failed in their attempts to pass a bill prohibiting schools from starting prior to Labor Day. Grassroots efforts, including the volunteer coalition Save Our Summers – North Carolina (SOS-NC) worked to pass the “School Calendar Law,” preventing early start dates.

In 2004, the N.C.General Assembly passed a law that required schools to open for students no earlier than Aug. 25 and end no later than June 10, but some school districts have ignored it or sought exceptions.

“Past polls have shown 70%-80% of North Carolinians support later school start dates,” according to the SOS-NC website. “Despite the popularity of the concept among North Carolina citizens and its legitimacy in law (it was thoroughly considered and debated on the floors of the General Assembly before passage), special interest groups continue to try and circumvent and overturn it.”

According to proponents, the push for a change to the New Hanover County school calendar cames from the desire to streamline the current nine school district calendars to a proposed six, as well as devising a calendar that would allow students to finish one semester before the winter break, begin the second semester in January and end it before Memorial Day.

Another incentive for change is that many high school students are dual-enrolled at Cape Fear Community College, so aligning the New Hanover County school calendar with the college calendar would allow for easier class scheduling.

“We have had good conversations and have shared our perspectives and we respect each other’s reasoning,” Hufham said of conversations she has had with the Board of Education members and school superintendent Tim Markley. “We would like to look at other options. Other school systems have been successful at starting at the end of August and ending in late May.”

Hufham points to Brunswick County Schools, which added minutes to each school day with the goal of ending the fall semester before winter break, and they were able to achieve that goal.

“The prime market for the coast is visitors from across North Carolina,” Guinup said. “But there are definitely great numbers coming from all over the country and from overseas. The airport is looking at expanding the market to a flying market, not just a driving market too.”

Visitors, the workforce and the tourism industry would all feel the effects of an early start date for local schools.

“It would impact the entire environment of an area,” Guinup said. “The nuance of the travel industry is that everything is connected. Not just the visitors market, but all would be affected if we start lowering the number of visitors to the area.”

Changing the school calendar to begin earlier in August may not only have a negative effect on the New Hanover County area, it may lead to more far reaching effects, Hufham said

“Setting the precedent that tourism isn’t really that important down here, they may do it in other areas, and that would pretty much kill the month of August,” Hufham said. “We are actively working to find an option that would work for both sides, both for education and the tourism industry.”